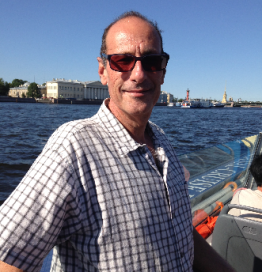 Called as Father of Naturopathic Endocrinology; in professional practice since 1981 (USA)

Michael Borkin, N.M.D. has been in professional practice since 1981. Considered the “Father of Naturopathic Endocrinology,” he was responsible for establishing the board specialty and authored the first “National Board in Endocrinology for the American Naturopathic Medical Certification & Accreditation Board” in Washington, DC. In 1989 he began development of a transdermal delivery system designed to deliver hormones and nutriceuticals. In 1996, he established “Market Resource International” to market these transdermal formulas to the medical community. Presently, Dr. Borkin is Director of Research of Sabre Sciences, Inc., the company he co-founded in 1999 with Victor Salerno. Sabre Sciences is a leading laboratory for salivary analysis of hormones and electrolytes, as well as a manufacturer of advanced custom transdermal remedies. With more than 10,000 patients to date, Sabre Science’s “Evidence-Based Approach” has proven the efficacy for the use of transdermal hormonal crèmes for the treatment of hormonal imbalances and dysfunctions related to stress. Dr. Borkin is also Research Director of the National Institute of Endocrine Research. In 2000, Dr. Borkin developed a certification program entitled “Natural Approaches to Endocrinology,” which he has taught at campuses throughout the United States. In 1987, he developed Neuro Emotional Sensory Training (NEST), a technique that increases healing capabilities through mind-body integration. Later Dr. Borkin developed Quantum Magnetic Manipulation (Q2M), a three-dimensional technique that utilizes magnetic energy as a means of diagnosing and treating all forms of dysfunction, from its emotional origin to its corresponding musculoskeletal manifestation. In the early 1990s, Dr. Borkin incorporated Heart Rate Variability (HRV) into a system he named Autonomic Equalization (AE), which allows the practitioner to manipulate autonomic activity and normalize sympathetic and parasympathetic activity while using computer verification. From 1993 to 1997, Dr. Borkin was President of the California State Naturopathic Medical Association, a chapter of the American Naturopathic Medical Association.In this position he was responsible for the development and implementation of new policies and philosophies including all political activities, educational programs, continuing education, research programs, relicensing seminars and data retrieval efforts. In 2002, Dr. Borkin was inducted into the Alternative Medicine Hall of Fame, making him the youngest inductee ever so honored.