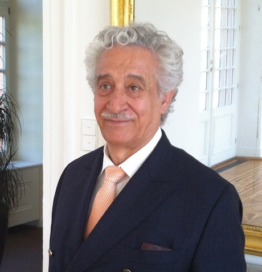 Christos Drossinakis was born in 1942 in the town of Chalkida on the Greek island of Evia.

After successfully completing an electrical engineering degree, Professor Drossinakis went on to specialize in experimental healing and specifically the effect of electromagnetic waves on bio systems. Over 130 university-led scientific experiments conducted to date make him the world’s most credible healer.

In the 1990s Prof. Drossinakis performed very successful scientific research with biophoton emission with Prof. Fritz-Albert Popp. From the same period is the study with thermovision with Dr. Schlebusch. In Bulgaria Prof. Drossinakis has successful projects with Scientific Research Center of Medical Biophysics, Bulgarian Academy of Sciences and Southwestern University, Blagoevgrad.  From 2002 till 2005 the Greek scientist conducted research in the Russian Center of Traditional Medicine, Ministry of Health with Prof. Stanislav Zenin, Dr. Evgeni Meyzerov,  Prof. Alexander Dubrov etc. In Saint Petersburg the study is with Prof. Konstantin Korotkov. In 2018 in Bulgaria he performed successful experiments for influence on cancer cells. The influence was performed with infrared thermal fields and electromagnetic fields.

In 2007 Prof. Drossinakis founded schools in Germany, Austria, Switzerland and Greece for study of his methods of healing. The name of the school is IAWG- INTERNATIONALE Akademie für Wissenschaftliche Geistheilung.  All students take part in scientific testing with Prof. Ignatov, Prof. Korotkov and Prof. Li Gendinovich.

Scientific awards
On 28 August 2005, Professor Drossinakis became the first Western healer to be awarded an ENIEM Galperin medal of merit for his outstanding achievements in the development of traditional folk medicine. The Greek scientist has Vernadski Prize for science. For the two awards he was honored by Professor Doctor Yakov Galperin, director of the Russian Research Center for Traditional Medicine (“ENIEM”).

On 23 May 2018, Dr Drossinakis was awarded an honorary doctorate by the International Academy of Natural History for his research into the effects of electromagnetic waves on bioenergetic systems.

Today, he carries out research and applies his findings within the framework of the International Academy for Mental Healing (IAWG), which he founded.