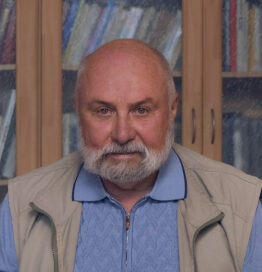 Semenikhin Evgenii is a psychotherapist and psychiatrist of the highest category, specializing in reflexology. Medical experience – 48 years. He graduated from the Dnepropetrovsk Medical Institute, specializing in general medicine in 1973. From that year he worked in the regional neuropsychiatric hospital, and in 1975 he became the head of the department of neuroses and borderline states. From 1980 to 1991 – chief physician of the city neuropsychiatric dispensary, chief psychiatrist of the city. From 1991 to 1992, the chief physician of the city center – oriental and traditional medicine.

In 1992 he created a private clinic for psychotherapy and oriental medicine, where he works as a chief physician. At the same time, he organizes the Medical Academy of Spiritual Development “MADRA”, the main task of which is the scientific substantiation and practical application of Agni Yoga, the heritage of the Roerich family and E.P.Blavatsky, primarily in the field of medicine (the study of consciousness), science (purposefully in the field of the Kirlian effect).

From 1992 to the present – President of the MADRA.

Together with Professor Konstantin Korotkov, organizer and participant of international expeditions: “The Earth is our common home”

Currently, the main work is scientific research in the field of GDV.

Published monographs and books: “Autogenic Meditative Psychotherapy (AMP)”; “Diagnostics by aura – scientific reality”; “Meditation – the path to health, happiness and harmony” (translated into English); Agni Yoga and Health (in collaboration with L.N.Ivanenko); “Pearls of Agni Yoga”; “Steps to health, happiness and harmony (co-authored by I.N.Zheltyaka)”; “Our future is in the present.”